Especially in the Ganges.

Back in my salad days, I used to drive a cab at night in San Francisco.  Loved launching a Plymouth Satellite off Nob Hill, a good 30-degree drop.  Too much Steve McQueen, I guess.  Anyway, I’ve always had a fascination with traffic, particularly its ebbs and flows.  I thought I had seen everything, but traffic in India, what our guide Prabhu called “Organized Chaos,” was the most impressive mess ever—tuk tuks, trucks, motorcycles, Suzuki Swifts, even a crane on wheels, and maybe a few cows and carts an inch or so apart.  How in the name of Shiva would our bus get through this?  How could anything?

Somehow the traffic did move, albeit slowly as a mouse through a snake’s intestines.  Drivers competed for angles, sliding past obstacles, inches to spare, smooth, baby.  If space did appear, it belonged to whichever vehicle got there first, the competitor giving way at the very last instant.  It was not uncommon to see a family on a Vespa slipping between vehicles.  Perched above, Denise and I sometimes had to look away, for fear of seeing a mauling.  Nothing happened, at least on our journey, praise gods.  I came to understand that there existed a collective patience.  The drivers in the steel ballet expected traffic.  It just is, like the incessant honking.  “Please honk,” a common display on back panels and bumpers. 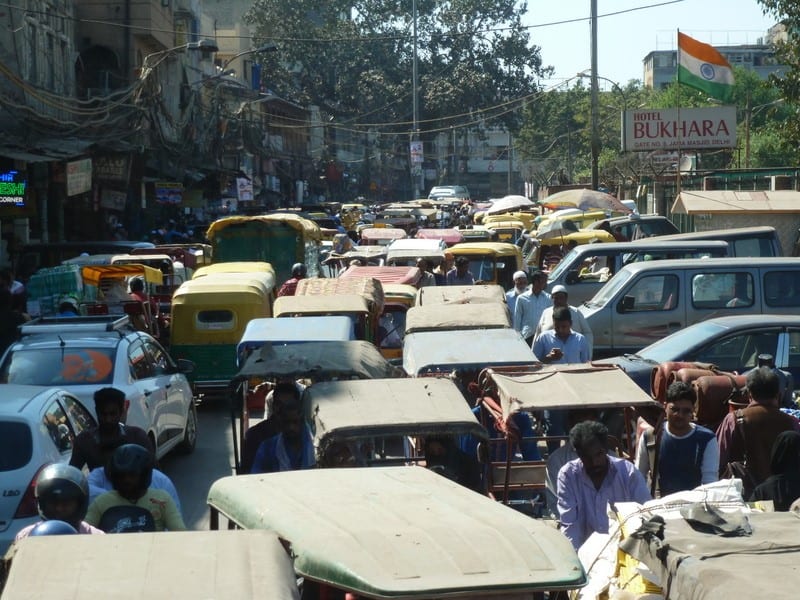 Which brings us to Varanasi, holiest of the seven sacred sites in India.  Buddha gave his first oration here.  The city borders “Mother Ganga,” where for two millennium people have come to die and cremate their loved ones.  Over 2,000 temples grace this 3000-year-old city, as well as over a million souls and countless mourners.  Never had I seen such a jam. Wedged between centuries-old buildings, shops and hawker stands, it had ossified into a single mass.  The big tour buses did not help.  I was happy to leave ours behind a good quarter mile from the Ganges.   At this point in the tour, we knew the drill.  We piled off the bus and followed Prabhu, his barrel chest thrust out, his arms and shoulders pulled back, his collar turned up.  The back of the yellow golf shirt was a beacon in the throng of humanity, animals, and machines.  If Prabhu crossed a crowded street, we followed with the same determined gate, praying that the traffic would stop.  He had taught us well.  Everyone kept pace, so the drivers could calculate how to get by without hitting us.  Not one of us stopped or veered in a different direction.  We had to be predicable.

Near the river, he gathered us like chicks, making sure we were all there.  “Sticky rice, sticky rice!”  We crowded around him, showing our faces.  Satisfied we numbered 16, he continued leading us to Mother Ganga.

Along the walkway, choked with people, we stepped around a twisted young man splayed on macadam, pushing a tin cup that held some coins and a bill or two.  A tiny wrinkled woman, with a baby in a filthy blanket, held out her palm.  A man with elephantitis sat a wooden wheelchair, his raised foot as big as Hulk’s.  People with missing limbs or other deformities were a common sight.  Along the side men in orange robes rested in the lotus position with their begging bowls.  Children in rags tugged at our sleeves.  We pressed on, knowing that if we gave one rupee, they would descend on us in a frenzy.  Prabhu had advised us to ignore the beggars, to avoid giving recognition.  Often they worked for someone.  The baby could be a prop.  “They are not starving.  There’s plenty of food for the poor.”  Perhaps it was true.  During the trip, we saw plenty of poor people but few, if any, were starving.  We also had opportunities to serve the poor during the tour.  More on that later.

The mile-wide river spread out before us.  Longboats glided through calm waters.  On the causeway, a bearded man with ashes on his weathered face stared at Mother Ganga.  A white stripe extended from his forehead down to the bridge of his nose.  He was an “aghori baba.”  Prabhu said such men often ate their food from a human skull.  Or they wore the skull as a head cover. Similar to the early Christian ascetics who fasted in the desert, such as Saint Jerome, the life of an aghori is one of renunciation and mortification of the flesh.  They have one robe and one role:  inner cleansing through self-discipline.  These devotees of Shiva seek “moksha,” liberation from the cycle of reincarnation, and tend to live near charnel grounds.

Prabhu led us along the causeway and down a cement ghat, which, in Hindu, means “river landing stairs.”  Chattering girls, all arms and legs, skipped along the ghat, holding platters of leafy cups, each ringed with marigolds.  Riverside, after a quick negotiation with two young men, Prabhu waved us onto a wood vessel, a longboat powered by something that looked like a weed wacker.  Before we pulled away, three of the girls floated over the water like Tinker Bell, landing on the stern of our boat.  Prabhu bought seventeen cups.  The little angels waved farewell, their nimble feet dancing across longboats.

We cruised down the river watching the activity on the ghats, the ancient architecture, and the crush of people the closer we came to our destination, the Dashaswamedh Ghat.  They say the holy fire that lights the sandalwood has burned without interruption for 1,000 years.  24/7 families carry shrouded bodies on bamboo litters through narrow streets; flesh is coated with ghee to ensure a thorough burn.  The body is seen as a shell, a cocoon, nothing of value.  Best to dispose of its ashes in the Mother Ganges.  It’s considered bad form for to weep. 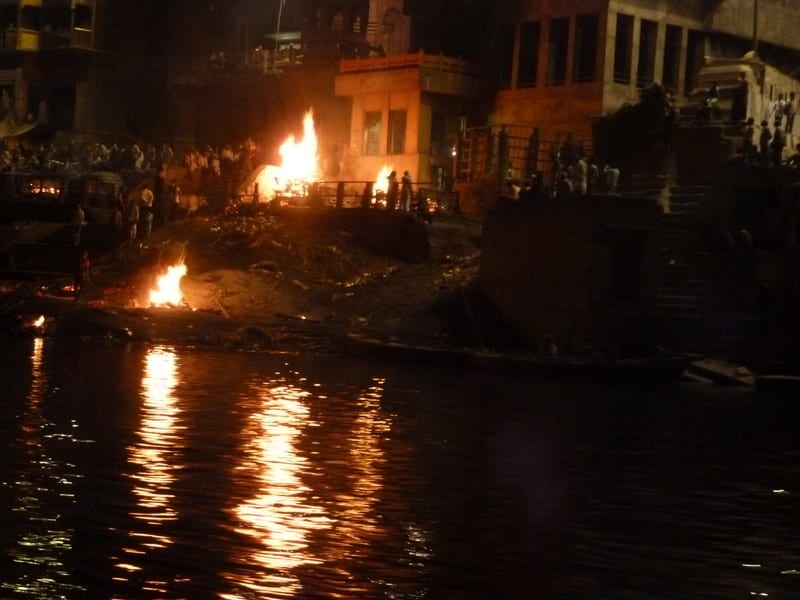 Sparks flew into the night.  Next to the pyres was a brightly-lit stage.  A line of orange- clad priests were raising what looked like flaming Christmas trees in a salute to Lord Shiva and River Ganga.  Drums, horns and flutes created a driving beat.  Faster and faster the flames spun about.  Time ceased to exist, only here and now in its rawest form.

Later we pulled away from the noise and smoke.  Prabhu directed the boatman to a place of solitude, a good distance from shore.  The engine was cut.  Prabhu lit the wicks and handed out the cups.  Each of us cradled our flame.  I thought of my late wife, dear Kathy, who died far too soon at 53.  Denise thought of her two siblings, Pat and Mark, whom she had lost this past year.  Prabhu, who recently lost his father, sang an ancient prayer.  Then each of us placed the cup in the water and watched it float away.  I was surprised by the intensity of emotion.  My wife had been dead for 18 years.  Yet it felt as if I were saying farewell one last time.  The boat was silent as we returned to shore. 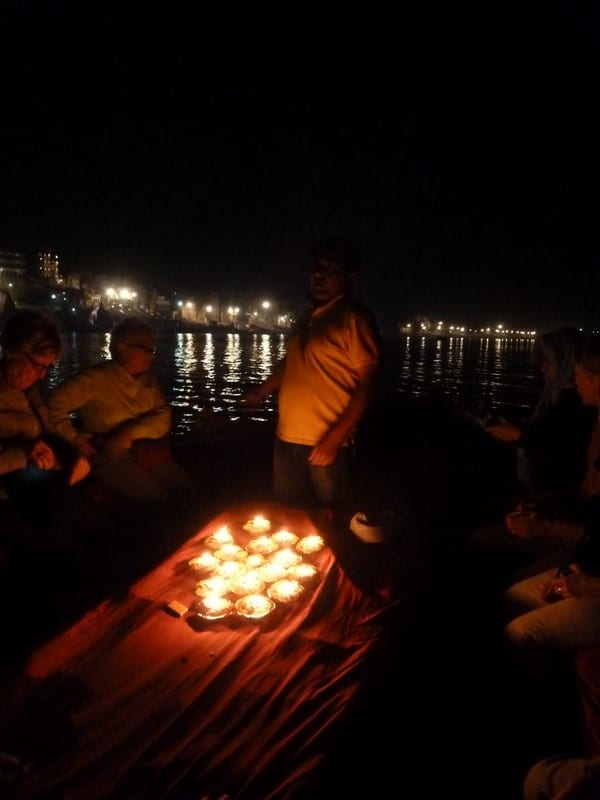 In the morning we returned to the river and rented another longboat.  The man rowed us down the river, where we saw many people bathing.  Mourners traditionally bathe in the Ganges the morning after the cremation, part of a 13-day period of remembrance and prayer, which ends with a feast to celebrate the soul moving on to the next life.

People from all over India make pilgrimages to this holiest of rivers.  Is it polluted?  Of course.  I did not see bodies, a common past occurrence, but I did see the head of a cow floating in the current.  Whatever, that did not stop people from cleansing themselves, even mothers with their babies.  Nor did it stop one of our fellow tourists, the agronomist John, a former Peace Corps volunteer in southern India, who helped build an irrigation system over a three-year period in a poor village.  Before joining us on this tour, he returned to that village for a reunion.  People traveled hundreds of miles to see him.  Forty-five years had passed.  The people he had befriended now had grandchildren.  He and another volunteer were feted as honored family.  Best of all, John saw the results of his labor.  The village had prospered.  They now had electricity and access to clean water.  Many farmers had moved into the middle class.  Prabhu declared John a “true Indian” as he splashed through the soupy brown water. 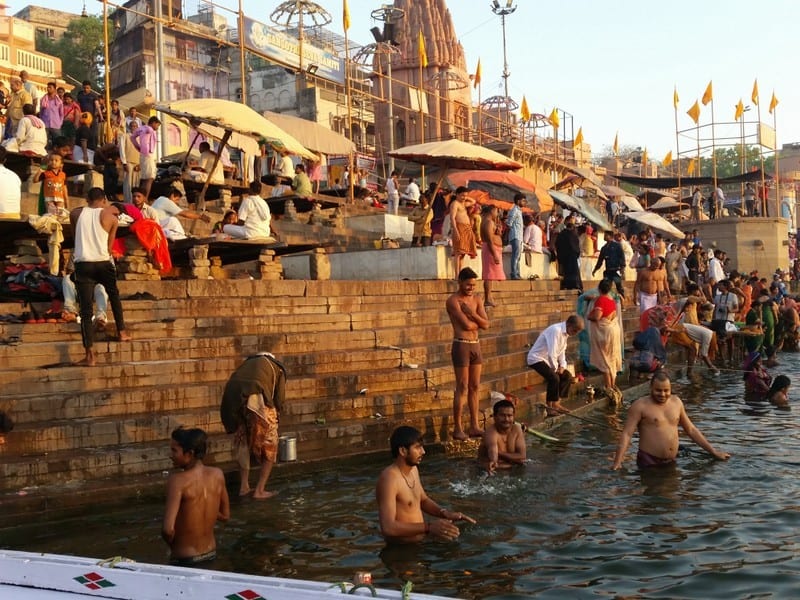