Around 950 A.D., in the tropical village of Khajuraho (garden of date palms), artisans took their hammers, chisels and knives to sandstone and granite.  Over the next hundred years 85 temples rose in tribute to Vishnu and Lord Shiva, a richly detailed celebration of spirituality and sensuality.

The architectural theme of these temples is what the guidebook calls “an upward urge.”  Each temple has five parts, the portico, assembly hall, vestibule and sanctum.  Last are the decorated domed rooftops.  From far and wide Hindus and Buddhists come to these temples, climb the ancient steps and wait their turn to enter the sanctum, the high  space.

Today at the World Heritage site, 22 surviving temples stand largely intact.  After the Taj Mahal, Khajuraho is the most popular tourist spot in India.  The temples seem to rise into the sky.  Like the Incas in Machu Picchu, the creators used no cement or mortar.  Each slab of stone had to be carved to an exact size to fit the corbelling pattern.  Even more amazing are the sculptures crowding the temple walls.  All figures appear to be in motion, whether it be an elephant charging into battle, a naked girl washing her hair, or a couple fornicating.  There is a fluidity, a movement, a dance.  The faces of those making love are serene, the men smiling in delight while the women seem languid, dreamlike, their eyes long and expressive, their lips full, and their breasts profound.  Movement is often exaggerated.  One would have to be an olympic gymnast to replicate some of these poses.  Denise and I were so impressed that we did a quick love pose on the top of the steps of one temple for the benefit of Karen, our new friend from Seattle.  The picture taken will not be seen by the grandchildren.

One has to ask:  What is their purpose of these figurines?  To titillate?  To arouse the onlooker?  On the surface, some might view the various sexual poses as pornography, something that could corrupt the soul.  The famous Victorian puritan, Mohandas Karamchand Gandhi called them “indecent and embarrassing” and approved of religious vigilantes taking hammers to the figurines.  Fortunately,  a well-known writer, future Nobel-prize winner Rabindranath Tagore, intervened with a letter to Gandhi and convinced the puritan not to destroy “a national treasure.” (Khajuraho guidebook, Mittal Publishing). 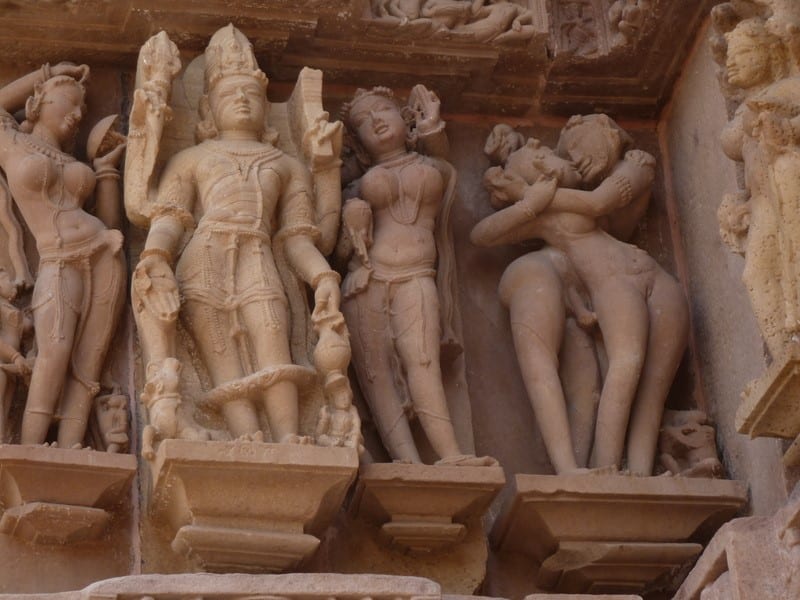 The key lies in the architecture.  “The structure as a whole is symbolic in itself,” says the guidebook on page 37 (text by Dr. Rajaram Panda).  The soul, the real source of life, dwells in the body and is “immune” to the garish display of flesh.  The focus of the soul is inward, like the deity enshrined in the sanctum, a small space devoid of sculpture.

I disagree with this premise.  The flesh and the soul are not mutually exclusive but part of the same dance, Lord Shiva’s dance.  The only expression of violence is found in the battle scenes.  The lovers make love; the voyeurs watch; and the world goes on, as it always has. 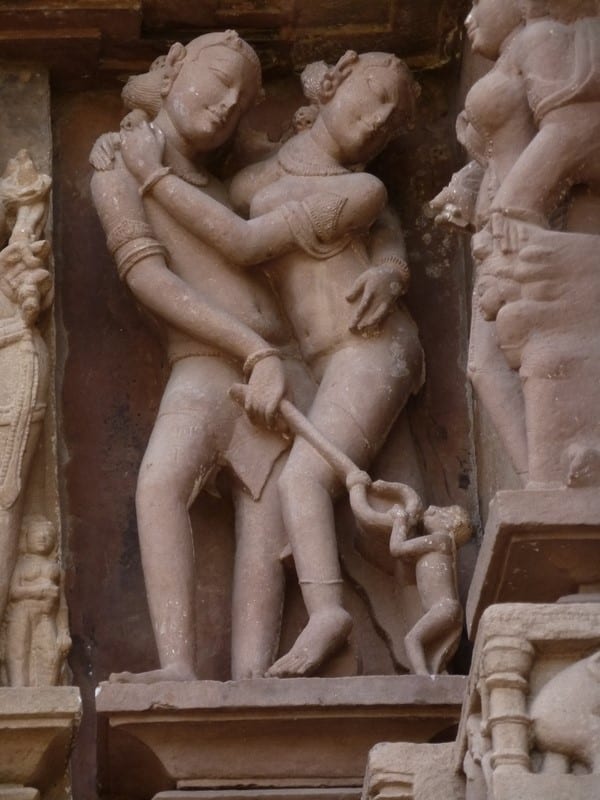