Years ago as a cab driver in San Francisco, I picked up a slick fellow in a shiny suit and platform shoes.  He was on his way to a place called “Dance Your Ass Off.”  As we rode downtown, he ate a Big Mac.  Finishing his meal, he wadded up the paper and flicked it out the window.  “Why’d you do that?” I asked.

In a good part of India, there has been no government to pick up the trash.  Prime Minister Modi is trying to do something about that, with the help of Mahatma Gandhi.  Pass through any town and you’ll likely find billboards using the round, rimless glasses of India’s patriarch to shame passing citizens into disposing their trash in the new bins and trash cans.  Good luck with that change in culture.  One gets used to seeing bottles floating in ponds and lakes, papers and plastic blowing across the beach, scattered along roads, in piles next to temples . . . trash is ubiquitous, like flies around roadside cow flops.  The one place you won’t find trash is in people’s homes.  Rich or poor, urban or rural, with or without electricity, the family home, often with multiple generations under one roof, tends to be spotless.  The instant one steps outside his or her residence, however, any trash accumulated will likely end up on the ground.  Natives have developed a defense mechanism toward rubbish.  Since it’s inevitable, they choose not to see it.  “It’s invisible,” said the guide Prabhu.

Which brings us to Jaipur, the “pink city,” home of the Maharajas, a 45-minute flight from Delhi on Indigo Airlines.  On the way from the airport, Prabhu had the bus driver stop on the side of the road, and he led us across a busy thoroughfare.  On the other side we passed small establishments offering smart phone repair, straight-razor shaves, used tires, and marble slabs.  A narrow walkway appeared, offering entrance to the community behind the shops.  “Yes,” he said, glancing up the rise.  “This will do.”  Obviously he had never been to this place.  Where was he taking us?

Once, he explained, it had been government land.  Then people started building; they did not ask for permission.  They just came with their scrap and started building small houses up the side of this hill.  Then the government did something very wise. It did not try to reclaim the land.  Rather, it encouraged this development, this independent initiative.

The day was warm as we lumbered up the rise.  Stone had replaced many of the original structures.  White-washed walls framed the walkway, casting welcome shadows.  We glanced in the homes.  Only a few had doors; fabric across the threshold was sufficient for privacy.  Prabhu learned from a grandmother on a stoop that the government now provided electricity well as water for an hour a day.  The people manage.  The community polices itself.  I saw not a speck of trash on the narrow stone steps and hidden courtyards.  What we did see were friendly faces, giggling grammar school boys leaning over an overhead wall, veiled mothers with infants straying from doorsteps, and teenage boys asking for selfies with their smartphones.  “Why would they want us in the picture?” Doreen asked.  “We’re just a bunch of old people.”  No matter.  We were an event!  Near the top an elegant older man with a big, curling mustache implored us to see his home and meet his family. 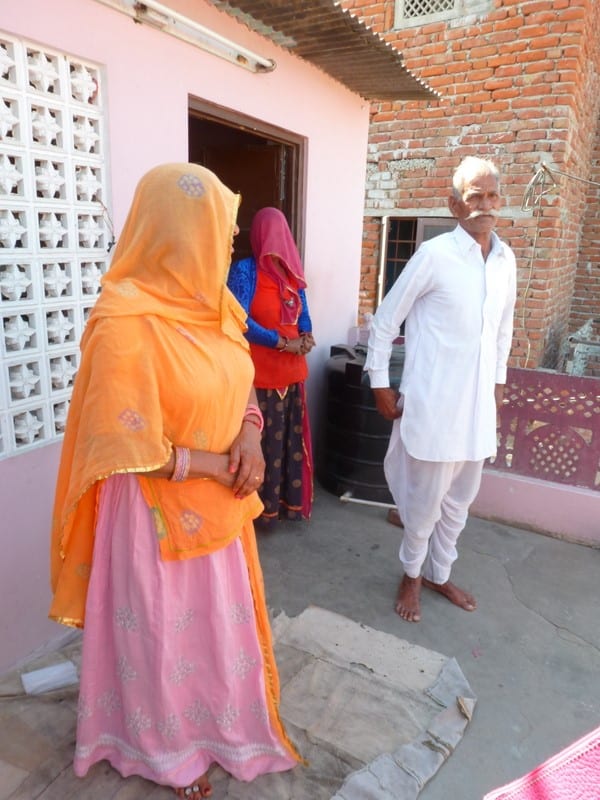 The kitchen had a wonderful spice aroma.  “You must be a wonderful cook,” Susan said to the young mother, who wiggled her head in that endearing way, as if to say, perhaps, maybe yes, maybe no.  Next to the shrine stood a television, and I wondered about its impact on the culture.  The place was neat as a pin.  It even had a flush toilet.  On the rooftop perch, we saw a plethora of wires going everywhichway along clusters of corrugated tin.  Rocks, lumber and scrap were piled on the roofs.  Satellite dishes dotted the sides of homes.  Lines of laundry flapped in the breeze.  Prabhu said that soon the government would “deed the residents” so they could own their homes outright, the Indian dream come true. 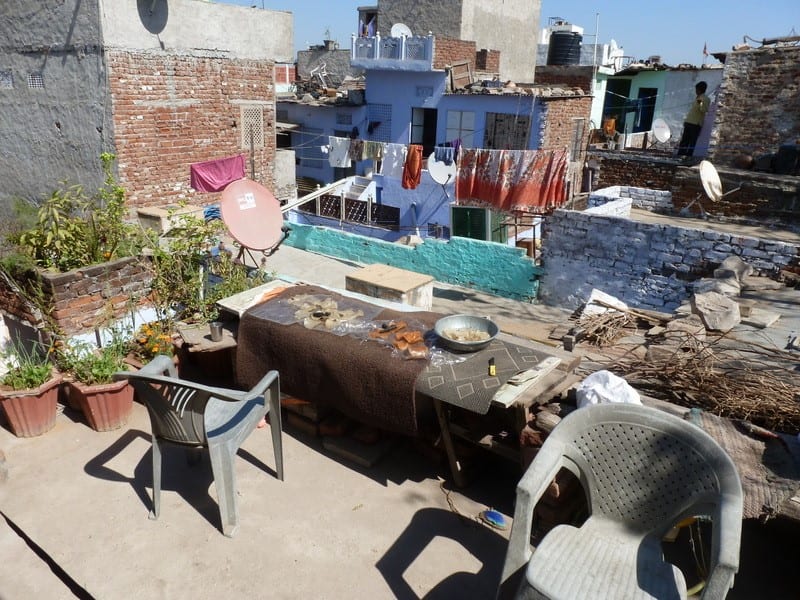 But where was the trash?  What did they do with it?  They couldn’t recycle everything.  At the end of the walkway, we came to a fence.  The houses ended and a field of scraggly trees extended upward.  And there was the trash, mostly food scraps dumped among the trees.  A half dozen or so black-haired hogs patrolled the bounty.  They looked very well fed.

In the south part of Mumbai, one building towers over all, a 27-story residence perched atop a parking garage for the 600 employees who serve a single family.  Cost?  A cool billion in U.S currency, making it the world’s most expensive residential property, save for Buckingham Palace.  With six car parks, three heliports and hanging gardens, Antilia (the name of the building) gives the appearance of shoe boxes stacked haphazardly on top of one another.  Not a place to inspire poetry.  The owner is Mukesh Ambani, chair of Reliance Industries, worth $27 billion, according to Forbes.

Mumbai is a city of 23 million souls.  The average worker makes about two dollars a day.  Sixty percent of Mumbains live in the slums.  What they do think about Antilia?  Apparently its owner is not well liked because he gives little to charity.  Most likely they don’t think much about his billion-dollar symbol of inequality.  They’re too busy trying to survive to think about anything but the matter at hand. 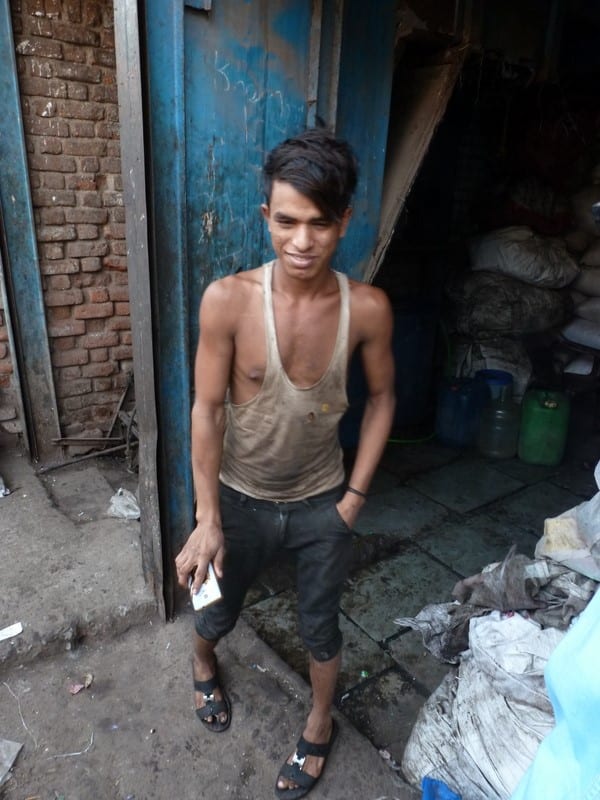 Which brings us to another slum, where refuse is king.  Set off a busy thoroughfare and next to a polluted flood plain, here’s where the computers end up, along with millions of other items.  It had the feel of Dickens’ London as Tome’, our Mumbai guide, led us  through the narrow maze of walkways.  Not much light made it to the ground.  A stream of purple and green trickled down the center as we passed cubbyholes and workshops where people toiled in the shadows at their specialty, be it cardboard, plastic bottles, oil cans, grills from cars, circuit boards—everything had value.  For the homes piled together, scrap formed the foundation, walls and roof.  The pungent, humid air throbbed with energy, but, except for the children (yes, there were families here), smiles were few and far between.  Consider the young man with torn pants, plying his trade as he sits on the ground (see photo).  Around his big toe he had looped a wire so he could pull it taut.  With a knife, he peeled away rubber to get at the copper.  I wanted to ask him if he worked seven days a week, if he had dreams for the future, if he did this for his family, but I did not want to disturb him.  Or insult him. 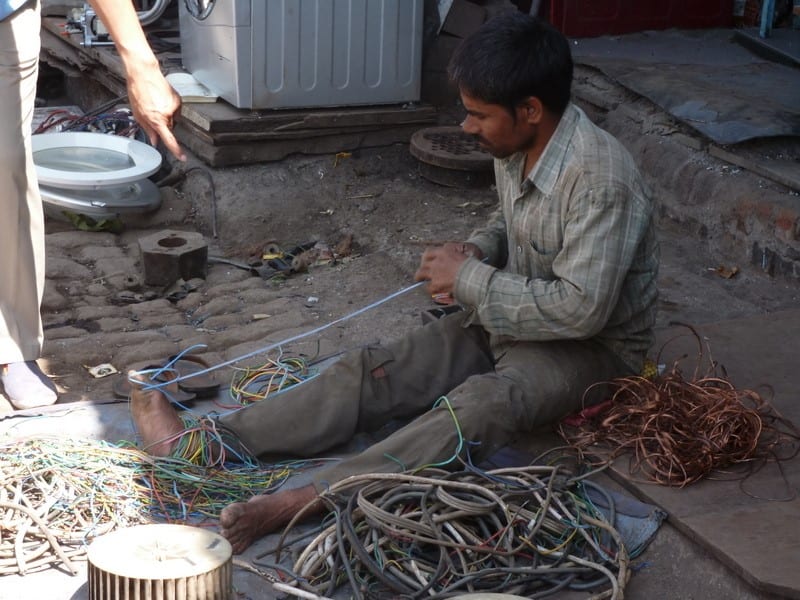 Unlike in the wealthier parts of the city, we encountered no beggars.  We also felt safe, though I did tuck my wallet in the front pocket as standard operating procedure.  Amidst all the activity, a certain order did prevail.  Recycled materials were exported from the complex while trucks were pulling up with more refuse.  Contrast the men in soiled clothes with the Muslim owners of these enterprises, bearded men in spotless white from head to toe.  According to Tome’, some entrepreneurs here have become millionaires.  One man’s trash is another’s treasure.

The last slum we experienced, Dharavi, could not have been more different than the previous.  There grey and black dominated; now we saw primary colors splashed on the faces of concrete houses, blues, yellows, oranges, purples and red, sponsored by a local painting company.  All walkways led to the heart of the slum, a square acre, open to the sky.  It was all about laundry.  Stone cubicles, each with a spigot, took up good portion of the work area.  The government provided the water and the people the labor, be they grandmothers, mothers, daughters, grandfathers, or entire families.  The sound of soaked fabric slapped against stone mingled with a yogi playing a flute, India at its best. 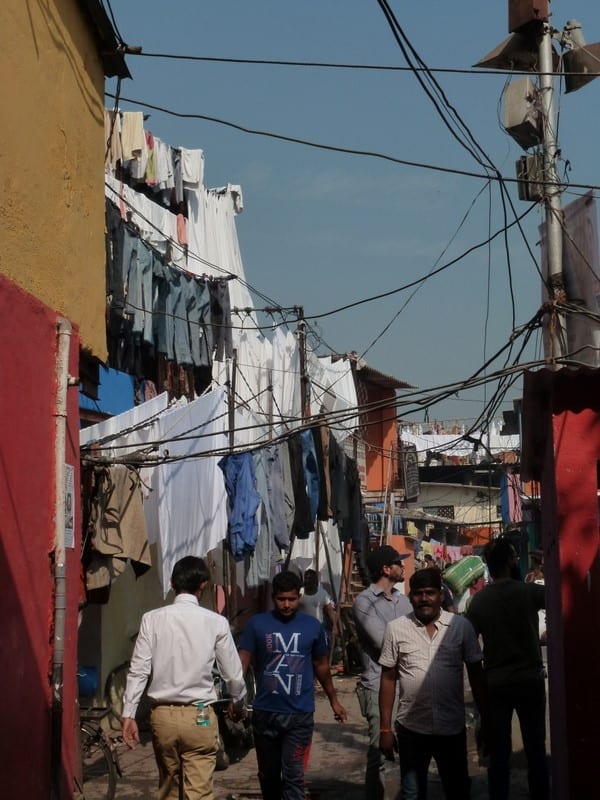 Around the laundry area flapped the results of that labor, lines and lines of uniforms, jeans, white shirts and black pants, towels, sheets, and whatever else their clients had delivered.  No need for clothespins; twisted rope held each item in place.  The main source for the laundry?  A luxury hotel not far from Dharavi.  If you’re familiar with the novel Shantaram, which takes place in a Mumbai slum, you might recognize the World Trade Center towering over the slum.  Dharavi has a story to tell. 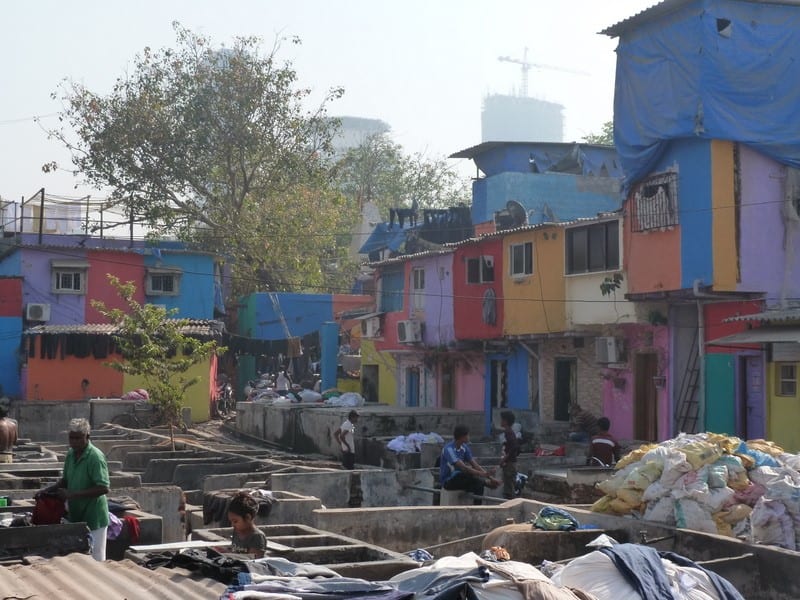 Tome’ led us through the narrow walkways that wound by the entrails of this vast enterprise.  A barber with a straight razor was shaving a man.  Another fellow was pushing big black iron, heated by hot coals, over a dress shirt.  Industrial washing machines, built from scratch, tumbled tablecloths, blankets, curtains and rugs, part of the “A to Z” laundry.

The doorless homes, perhaps a room or two, had a sense of place.  Each home distinguished itself by its display around the opening.  Some hung a string of peppers and onion, for luck.  One home had a horseshoe.  Above the threshold, many had tiles displaying a religious figures, such as Ganesh, Krishna, or Jesus.  Flowers were strung across thresholds or perhaps a string of shells and beads.  Children in colorful garments emerged to stare at us with those big, dark eyes.  Many were barefoot and wore anklets.  No broken glass here.  The boy with his younger brother caught our attention.  On his tee shirt was written a beautiful message:  “Believe in yourself.” 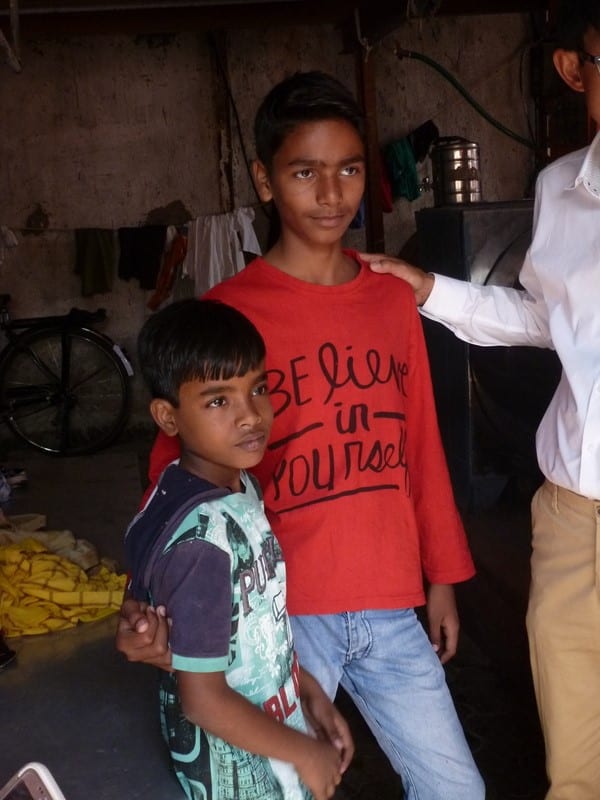 Deeper in the labyrinth, we climbed three flights of stairs.  People had ventured out on the balconies to see the passing strangers.  To reach the roof, we had to trust a rickety ladder.  At the top we were rewarded with a view of high-rises and, closer in, waves of laundry covering rooftops.  With the wind and sunshine, it was like being in a Matisse painting, a rich flow of color and commerce.