Open up a daily edition of the “hindustan times,” and you’ll find among the classifieds a rather extensive matrimonial section:  Under “Brides wanted” and “Grooms wanted” lay  colorful sub-categories ranging from communities of origin (Agarwal, Arora, Punjabi), religion (Sikh, Muslim, Hindu), caste (Brahmin), occupation (doctors looking for doctors) to marital state (divorcee/widower).  Regarding the ads, they are diverse as the country itself.  “Elite Brides Wanted” and “Elite Grooms Wanted” scream the headlines for a matchmaker.  As one who has spent a good part of his professional life writing ad and pr hyperbole, I can appreciate the boldness of the approach.  After all, who wouldn’t want an elite mate?

Wow.  There’s a lot that can be read into that pitch.

Sounds like this woman is all business.  Indeed, marriage is big business in India.  In old Delhi, Denise and I rode a rickshaw, a bike powered by a stringy fellow, through the narrow pathways crowded with marriage shops on both sides, a rainbow of colors, silks and fabrics.  For rich families, it’s not unusual for a family to spend a million dollars on a wedding, which would not be complete without an appearance of an elephant or two, for good luck.  For those of lesser means, they can turn to politicians.  In town after town we saw billboards displaying the friendly faces of local politicians, who offer to pay for weddings.

Regarding arranged marriages, it may still be the norm, despite the encroachment of western culture, particularly from the States.  Many young and talented Indians come to the U.S. to make their fortunes.  However, when the time comes for them to choose a mate, many defer to their families and return home to meet their future bride, often selected by the mother.

Our first guide in India, Prabhu, not only showed us his country, he also shared pieces of his life.  As a young man, he earned an M.A. in Tourism; despite that degree, he ended up in a dead-end job writing travel tickets by hand.  Chance brought him in contact with a tour operator who asked him if he would like to try and become a tour guide . . . in the Himalayas.  Prabhu had never been in the Himalayas.  Altitude sickness at 22,000 feet nearly did him in and he returned to Delhi in a foul state of mind.  No way could he do this for a living.  “Wait three days,” the tour operator advised.  On the third day Prabhu returned and accepted the job offer and his life took a turn for the better.

Then one day in the mountains he received a call from his father.  “I have a bride for you,” his father said.  Without hesitation, Prahbu returned to his village to marry the girl his parents had selected.   According to tradition on his wedding day, he arrived at her home on a white horse.  How romantic!  He told the story with his handsome smile.  (Indians, on the whole, have gorgeous white teeth)  He and his wife, a raven-haired beauty, now have two sons, 15 and 13.  Judging from the photo, both will soon be taller than their dad.  From his easy manner, Prabhu Singh Bhati appears to be a man in full.

Former U.S. Secretary of State Madeleine Albright told an interesting story recently.  It took place in Turkey, just before her tenure in the Clinton Administration came to an end in 2001.  She was asked by someone in the audience if she approved of women having to wear veils.  She replied that this should be “a personal decision” by the woman.  She received a chilly response.  Being the wise soul she is, she realized later that she had spoken from a perspective of a western woman.  Of course a woman should have control over her body and what she wears.  However, in the context of the culture in Turkey, the issue was more complicated than it appeared.

It can be hard for a westerner to get his or her hands around the idea of arranged marriage.  One might think of slavery or child brides coupled with old men.  I’m sure there’s abuse in India, but it appears to work in many cases.

Prabhu grew up in a village with no electricity, only 50 miles from the Pakistani border.  His mother had walk two miles to get water.  Under those circumstances, the family is everything.  Above all, it is an economic unit, one of the keys to India’s rise.

In Jaipur, Denise and I, along with four fellow OAT* travelers (Doreen, Erin, Edie and Susan) had dinner in a “middle class” home.  Eight people live in a second-floor apartment:  two brothers and their wives, two children, as well as the parents of the brothers.  (traditionally, a bride leaves home to join the groom’s)  By Indian standards, this is more than a middle-class residence, for the family owns the three-story apartment building.  Their floor has three bedrooms, each with a western-style bathroom, a balcony, a shrine to their elders, a decent-sized kitchen and sitting area. 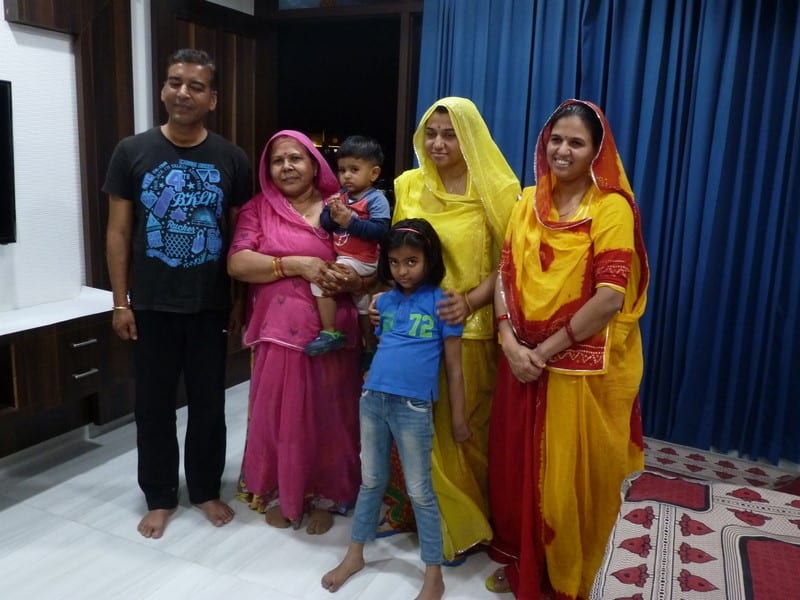 Around the coffee table we gathered with our hosts.  The veiled women were resplendent in their flowing silk saris.  Such vibrant colors.  Such elegance.  They were beautiful to look at, especially when they smiled.  Hands tucked in their jeans, the brothers hovered in the background, not saying much.  Their two young wives were very talkative as they served us drinks. 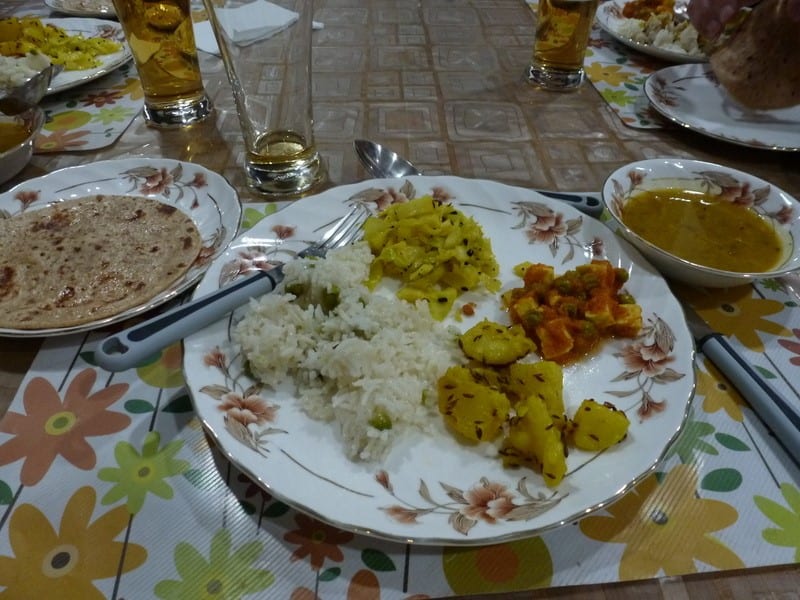 Prahbu had told us to ask any question we wished about their lives.  Naturally the conversation veered toward their arranged marriages, which the young women viewed as a natural part of their lives.  The round-faced mother of a shy, school-age girl and an energetic little boy worked as an IT expert during the day.  She rode a Vespa to work. She said she was treated well by the men in the office, “as an equal.”

At home, however, we learned that she could not speak directly to her father-in-law.  When in his presence, she had to drop the veil over her face.  Denise was perplexed by this revelation.  How could this dynamic woman be out in the world working, yet live a life of subservience in the home?  We also learned that the men do not cook, and the mother-in-law cares for the children while their mother is a work.  “She’s a big help.”

Both women met their future husbands just once—at the engagement ceremony.  Before marriage, a Hindu girl can wear what she likes, jeans, a skirt, no veil.  It’s her choice.  Once married, she dons the sari and veil, “a sign of respect,” explains the young mother.  Only in the presence of her husband can she unveil.  If she wishes to speak to the father-in-law, she must go through her husband.  “I can tell him anything.”

The smiles and laughter of the two young women appeared genuine.  For them, the veils they wore were not chains, but acceptance of a way of life that went back centuries.  For a country of 1.2 billion plus, family is paramount.  The ties that bind are also a web of strength that extends across this ancient land.