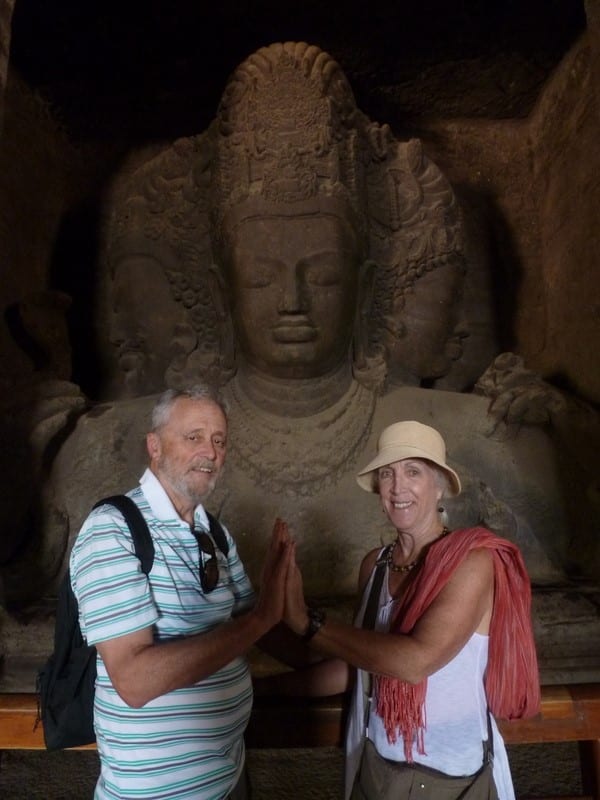 In March of 2018, Denise and Dave experienced the magic of India, starting in Delhi and ending in Mumbai.  Here are some impressions we have brought back, along with some of the 1,300 photos, taken by Denise.  We will adding to the blog on a regular basis.  Feel free to add your own impressions.  Also, be sure to explore the web pages for Dave Bolton’s novel, Love Thief, the Legend of Ixmal the Healer. 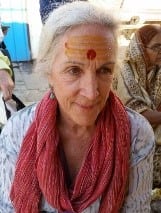 No, I am not talking about my husband, although he is a wonderful man. I’m referring to my trip to India. I had always been fascinated with the culture, mysticism, people, and places of India. Early in my life it was the Taj Mahal that most caught my attention. If I could ever stand in the presence of such a monument to love. Oh, how breathtaking!

I did not come from a family of travelers. My father and brother had gone overseas to serve respectively in World War II and the Vietnam war, but I was the first to travel for fun. I visited the usual spots in Europe with my friend, Peggy, when we were 20. It was a great adventure, although I cannot remember how we planned such a trip without the use of electronics!

Since that time, I have been quite fortunate to travel to many places, but it has always been the 3rd world countries that called to me. However, India seemed out of reach. Such a strange place with tremendous poverty and disturbing displays of all kinds of physical and mental disfigurement on the streets. At least that is what I was told. It seemed too frightening and overwhelming to consider visiting.

Then I learned, through friends, about a travel company that was focused on learning about the people and culture. Being a bit of an introvert, I had never been drawn to the idea of tours, the preselected schedules and sites, along with the unknown personalities of the fellow travelers.  However, this was a way to make my dream come true.  So, after a little convincing of my husband that this would be a very special place to visit, we put our deposit down. Each time I thought about what we were going to do the butterflies in my stomach would become quite active. It was one of the best decisions I’ve ever made!

We planned to stay in Dubai (a stopover for our flight) to recuperate for a few days before joining our group in India. I had never flown for 14hrs and was a bit apprehensive about this much time on a plane. After all, I have a tough time being in a car for more than 5 hrs. I must say that the experience was quite pleasant. Air Emirates was one of the best flying experience I’ve ever had. We had plenty of elbow and leg room, good food, excellent entertainment choices and maybe best of all, all the cognac we wanted. The flight attendants were warm, friendly and helpful, doing their best to make everyone comfortable.

I was curious about Dubai and wanted to see a bit of this Disneyland of the Middle East.

I’ll tell more about this place later but for now let me just say that after having 14 straight hours of sleep, Dave and I were ready for our adventure. After 3 days in Dubai, we left for India.

Our flight arrived at Indira Gandhi International airport at 2:45pm.

I was in Mother India! 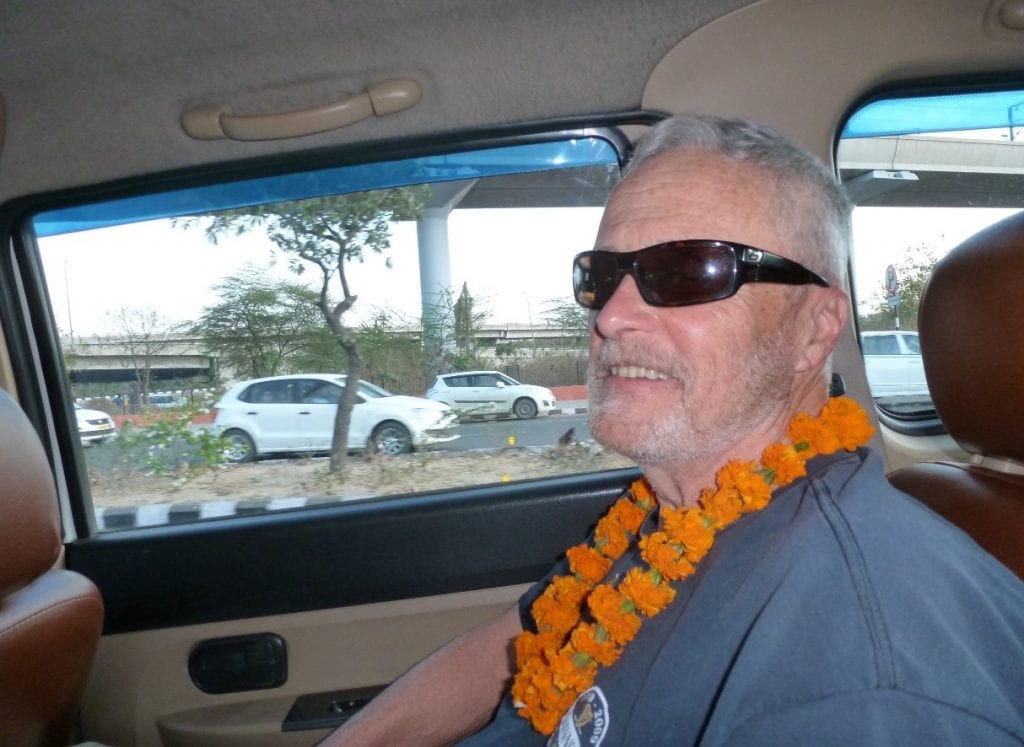 This is Dave with his marigold lei, in our guides car, on our way to our hotel in Delhi.

Our first hotel, The Suryaa, New Friends Colony was in New Delhi. Although the hotel was only 7.2 miles from Indira Gandhi airport it took a 45-minute drive to get there. We were grateful for a look at the city from the safety and comfort of the car. The hotel was a very large one that has seen better days. It carried the pollution of the city on its walls making it a dirty gray. Since I am not a hotel person, I am usually not particularly impressed or disappointed with the amenities. But, the roof top deck, which could have been a fine feature, was a big disappointment, being made unusable by the amount of pigeon poop on it. We wanted to take in the city with a drink and relax, but there was not a clean spot to sit on. Oh, the Western ways were not the Eastern ways. We had our drinks standing, looking over the edge of the terrace at the traffic below. The sound of the honking horns was one that would remain steady throughout our time in India. We retreated to the inside and had a nice meal in the top floor restaurant. We noticed a woman alone at another table and wondered if she might be one of our fellow travelers, but we thought she looked too young. This was a group for 55 and over. (You’re welcome Karen).

To be a good traveler means to adjust. After all, we travel to see that which is different from our usual experience. I wanted India to be shockingly different, I wanted an experience beyond all others that I had had. I was ready to be shaken. Little did I know that it would not be the kind of shaken I expected.

The sun sets on our first day in India. 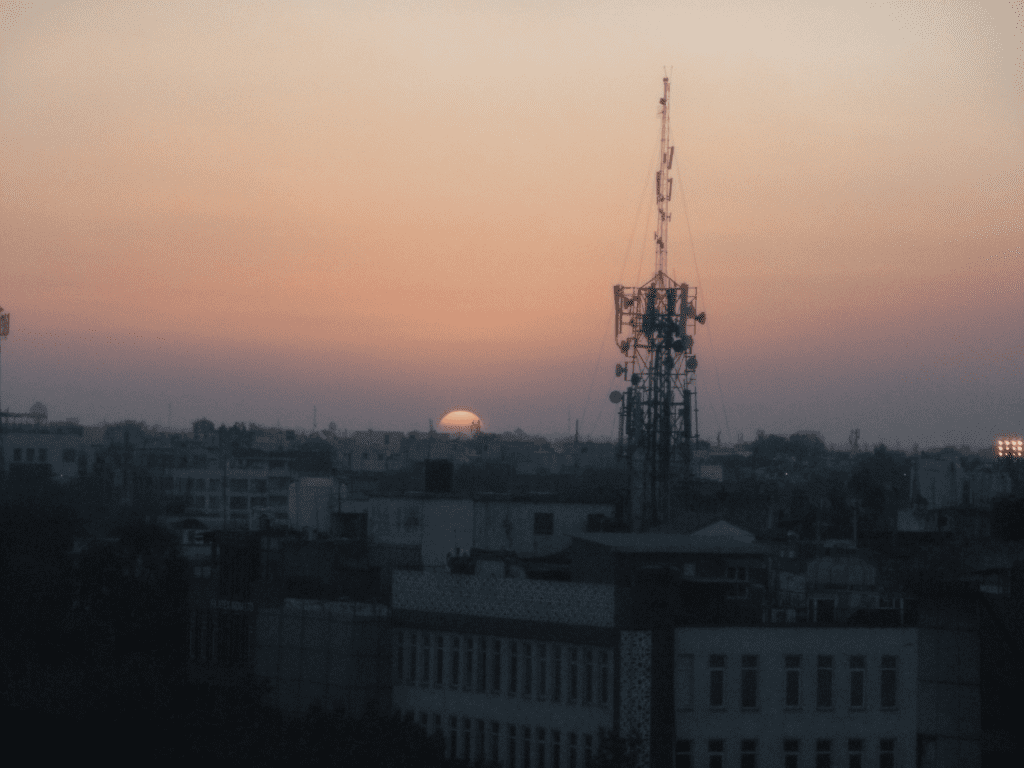 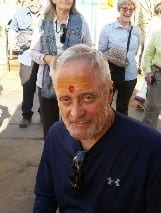 “Travel light, live light, spread the light, be the light.”

When I was a young cabdriver in San Francisco, I used to go with my good friend Craig Rock to a lawyer’s office in the Haight for an hour of kundalini yoga with Robert Zweig, esq.  He was a Sikh, a Jewish boy from Queens.  Wore the white turban and had an impressive curly black beard.  How he made the transformation I can’t recall, but I was intrigued with the religion he had embraced.

I spent a couple of weekends in an ashram, did the yoga daily (love the “breath of fire”), and met Yogi Bhajan, the Indian founder of 3HO (happy, holy, healthy) in the States.  I even had a Sikh wedding, with Robert presiding.  This came after a weekend of silence with my bride-to-be, sweet Sue.  There I was, a Catholic boy from Baltimore, in a turban.  Sat Nahm.

Though I never took the vows, I gained an appreciation for their way of living, which I would describe as communal, peaceful and charitable.  The Sikh Golden Temple, Gurdwara, exemplifies those attributes in Delhi.  Prabhu, our OAT (Overseas Adventure Travel) guide, once said there were 20 million “poor” in India, yet no one went hungry.  This could be attributed to the Green Revolution, which led to greater yields of wheat.  Another reason could be people like the Sikhs.  The temple complex feeds daily 15,000 people, rich or poor, whatever caste or state of mind, everyone is welcome, including 16 “mature” tourists from all parts of the States.

Feed the flesh and cleanse the soul, that is the Sikh way.  On the south side of the complex lay a shallow pool, a calm blue surface, so inviting on a hot afternoon.  From far and wide pilgrims travel to bathe in those waters.  It is said to have healing powers.  Water plays a big role here.  On the temple steps, a three-some dispense water from silver teapots. 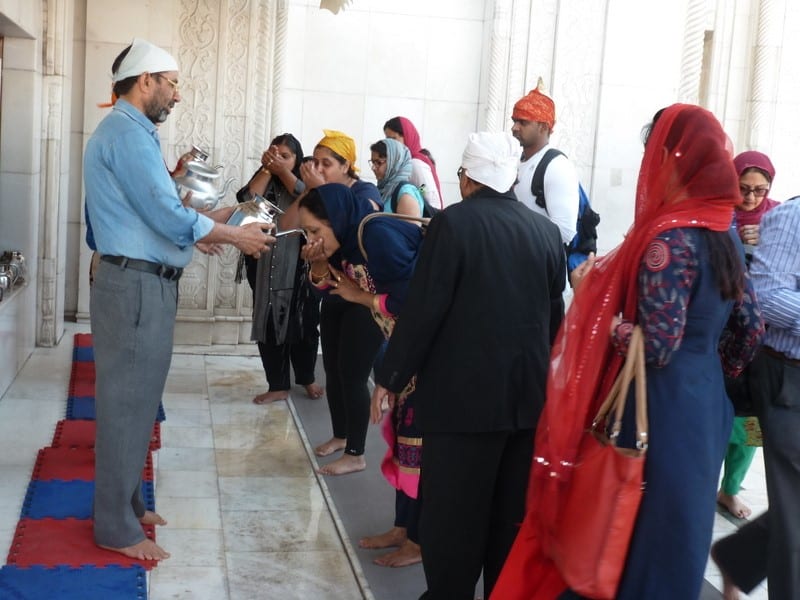 The spotless marble floors were cool to our soles as we entered the temple.  The walls were gold and the columns intricate.  In the center of the temple stood what looked like a white and gold gazebo.  It rose to a point.  Hundreds of people were in a lotus position.  From sunrise to sunset songs would fill the chamber, backed up by a keyboard, drums and a guitar.  The object of their veneration?  A book of writings, a recitation of the “shabad” (hymns) from Guru Granth Sahib, last of the 11 Sikh gurus. 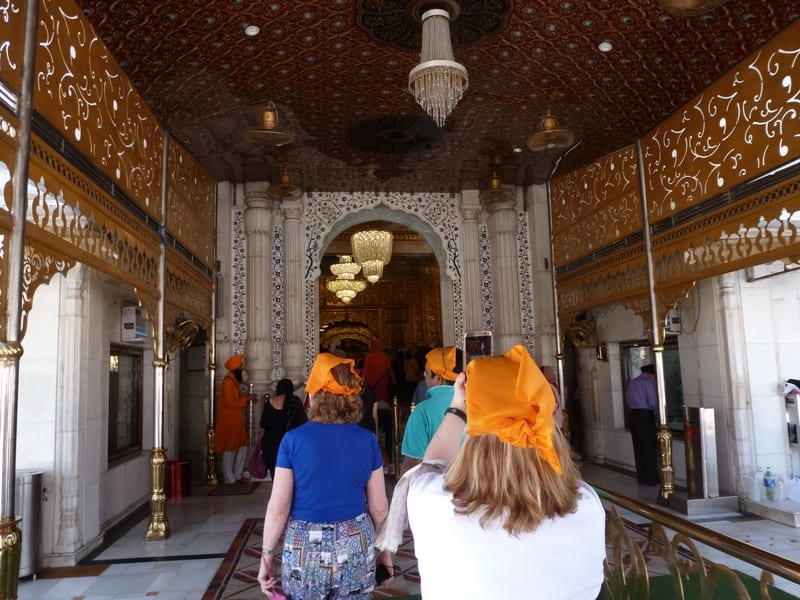 The tradition of a free, communal kitchen stems from the teachings of the first Sikh guru, Guru Nanak, who in the 17th century believed that unity of “humankind” could only be achieved through “selfless service.”  The entire production of meals at the Golden Temple is a marvel in social engineering.  At full capacity, I was told they could feed 100,000, which comes in handy if, say, there were an earthquake in Nepal.  In a matter of days, the Delhi Gurdwara management team could set up the entire operation in the Himalayas.

Food is a blessing, a good deed for the next life.  The 16 Americans had a choice:  we were welcome to take a seat on the floor in the big hall and enjoy a delicious vegetarian meal or we could help out in the galley.  Denise and I chose to join a circle of volunteers preparing what would eventually become nan.  With the help of a girl no older than nine, I used a roller on flour to shape something that looked like a tortilla.  I wasn’t very good at it, but I did get to serve lentils.  In my past life, I had worked as a waiter.  My skills were rusty, however.  The pail was heavy with beans and you had to be accurate with the spoon, so the lentils landed in the metal tray and not on the rug or ankle.  You also could not touch the tray with the spoon.  Bad hygiene.  Had a couple of mishaps before I got the hang of it.  No one seemed to mind.  As Jerry Lee Lewis once sang, I was movin’ on down the line. 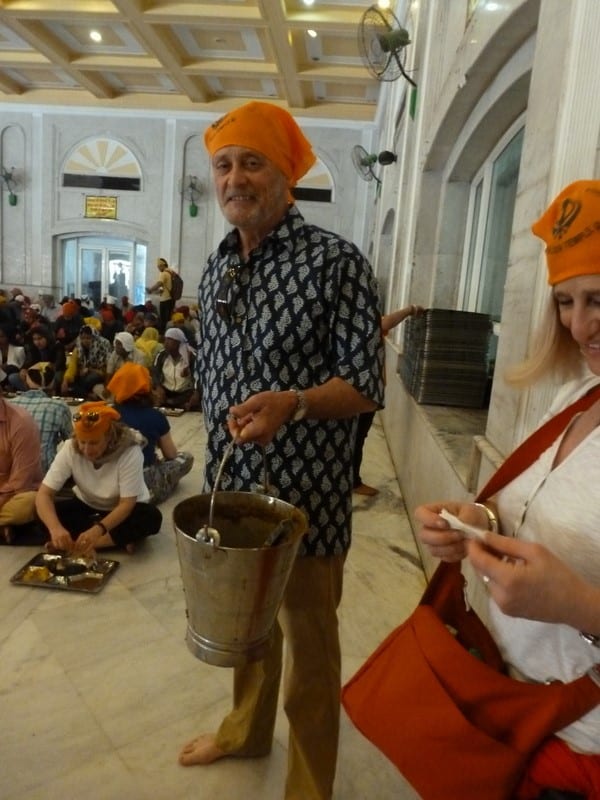